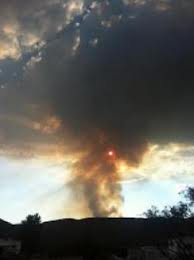 Good news for anyone who lives in the southeastern part of San Diego county and has been threatened by the Shockey Fire- it’s 90% contained! The Shockey Fire, which started Sunday afternoon, has burned 2,851 acres and claimed 37 structure and 1 life. There was reported 2 injured firefighters and 1 fatality. An 82 year old man told neighbors he wasn’t evacuating and unfortunately was found burned in his home yesterday. The cause is still under investigation. Prayers are with those who had their homes lost or damaged! My heart goes out to the 82 year old man who lost his life and the 2 firefighters who got injured on the job!

Tell me what you think! Cancel reply

Got Something To Tell Me?