I was watching The Ellen Show today and saw this story featured. I couldn’t resist to share! 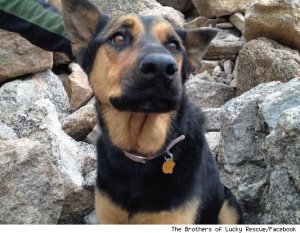 On August 11, 2012, hikers Scott and Amanda Washburn discovered an injured and abandoned dog on the steep 14,000 foot Mount Beirstadt in Colorado’s Rockies. The german shepard they named Lucky had bloody paws, was dehydrated, and unable to walk. The two couldn’t carry 112 lbs Lucky down the mountain so they wrapped up her paws to help her walk but she couldn’t. Determined to save Lucky, the Washburns went on a local hiker’s social media website 14ers.com and posted the dog’s picture along with a map to where she was found. Within a day, a group of 8 hikers lined up to help save this dog. They trecked up Mount Beirstadt for 9 hours to the same spot where Lucky was discovered and found her! They made a backpack and traded off carrying her down the mountain! Lucky was taken to the vet and treated for cut paws and dehydration- no other injuries!

On August 5, the dog was with it’s owner and a friend’s teenage son. Missy- the real name of “Lucky”- cut her paws on the rocky terrain and was unable to walk. The owner tried to carry the dog down but almost fell himself and had no choice but to leave to dog. He said he notified Search and Rescue but they couldn’t save an animal. For 8 days, the dogs was stuck on the mountain with no food or water. The owner came forward with this information after seeing 14ers.com. Anthony Ortalani posted several posts to 14ers.com about his reasons for abandonment and is now being charged by the Clear Creek County Sheriff’s Department with animal cruelty. One of the 8 rescuers is persuing adoption for Lucky. Lucky remains in the veterinary hospital and will be released to the county animal shelter when she is fully healed.

I’m just so happy there are people out there who would do whatever it takes to rescue this dog! I know if we saw an abandoned dog, we would do the same thing! I’m sure the owner had no intentions of animal cruelty and until you are faced with a situation like this, you don’t know what you would do.

Tell me what you think! Cancel reply